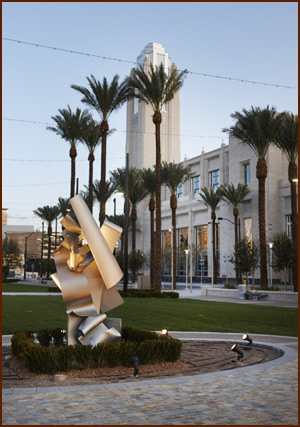 The Cabaret Jazz at the Smith Center is inspired by the greatest live music clubs from around the world - Dizzy's to Feinstein's.

Why not grab a bite, lift a glass, and be entertained by some of the greats.  You will be overlooking the city in this new, elegant, and intimate setting. Las Vegas has been waiting for this for so long and now it it here to stay!   Here are some of the June events.

Clint Holmes was named Las Vegas "Entertainer of The Year" three times and Singer of the Year four times.  He also received the Sammy Davis Jr. Foundation award.  Clint will perform an exclusive show for his idol, Bobby Short.  Clint's shows range from Contemporary to Jazz to Broadway in an ever evolving kaleidoscope of music.

Best known for her role in "Desparate Housewives" - Emily Bergl has wowed audiences and sold out the Oak Room with this show.  You will be entertained with a unique musical that blends hits from classic to modern favorites like Madonna to the Scissor Sisters.

Enjoy this brand new live show by Idina Menzel, award winning actress, singer and songwriter.  Idina was the star of "Wicked" on Broadway.

Lucy Woodward seamlessly draws from a deep well of jazz and pop influences to totally hook the audience.  Her take on Hoagy Carmichael's 1930 hit song "Stardust" and a rousing rendition of "I wan'na Be Like You (The Monkey Song)".

The Band is named from their venerable music venue located in New Orlean's French Quarter and founded in 1961 by Allan and Sandra Jaffe.  This is their 50th Anniversary of traveling worldwide.  Their goal is to nurture and perpetuate the art form of New Orlean's Jazz.

Check out the information website and all of the up coming events  http://www.TheSmithCenter.com.

Watch for the monthly posting of events at The Smith Center.