Supply and demand may soon change the home buying landscape in our great dynamic city of Las Vegas. There are several factors that may affect not only the inventory but also the price of homes and the price of rents.

The new bill requires judicial process to foreclose, which could slow down the time it takes to foreclose and resell the home.  Florida is an example of a judicial foreclosure state.  Foreclosures in Florida take as long as 300 days. 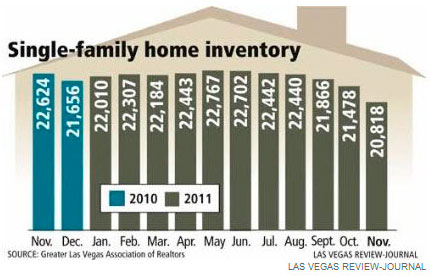 Just as important, the inventory of available units on the Multiple Listing Service fell to 20,818, down 8 percent from November 2010. The number of homes without contingent or pending offers fell 22.3 percent to 9,780 in November.

The modest increase in median price is attributed to strong demand, coupled with decreasing supply, said Paul Bell, president of the Realtors association. Real estate agents have been expecting a decline in inventory after a Nevada law that took effect Oct. 1 requiring lenders to provide an affidavit of authority to foreclose and other documents, backlash from the robo-signing scandal that emerged last year.

"It's more of a function of our third year with 40,000 or more closings," Bell said. "There's just less inventory, especially in areas where homes are really selling ." The number of desirable properties listed for sale continues to decrease, especially in good neighborhoods, master-planned communities and near large employment centers.

Bell says that ongoing sales surge continues to be driven by investors buying homes at bargain prices. "Investors are definitely making a difference right now by restoring homes and helping to drive up prices". The market saw a slight uptick in short-sale closings, or homes sold for less than the principal mortgage balance, which could be in response to the new law.

Also, asset managers have been approving more short sales and taking incentives offered under programs such as the Home Affordable Foreclosure Alternative, or HAFA. There were 150 to 250 homes a day receiving default notices before the law went into effect. Now it's maybe three to five a day, said Tony Martin of LV Default, a company that buys homes at trustee auctions.

The full impact of the law won't be realized until the first or second quarter of next year. A lot of Las Vegas neighborhoods have gone through 40 percent to 60 percent turnover of inventory, and that's another reason why the market has seen a decline in inventory.

This article was written by Hubble Smith at the Las Vegas Reveiw Journal.